We thank all participants for the success of the event!

Below some pictures and notes from the summit. 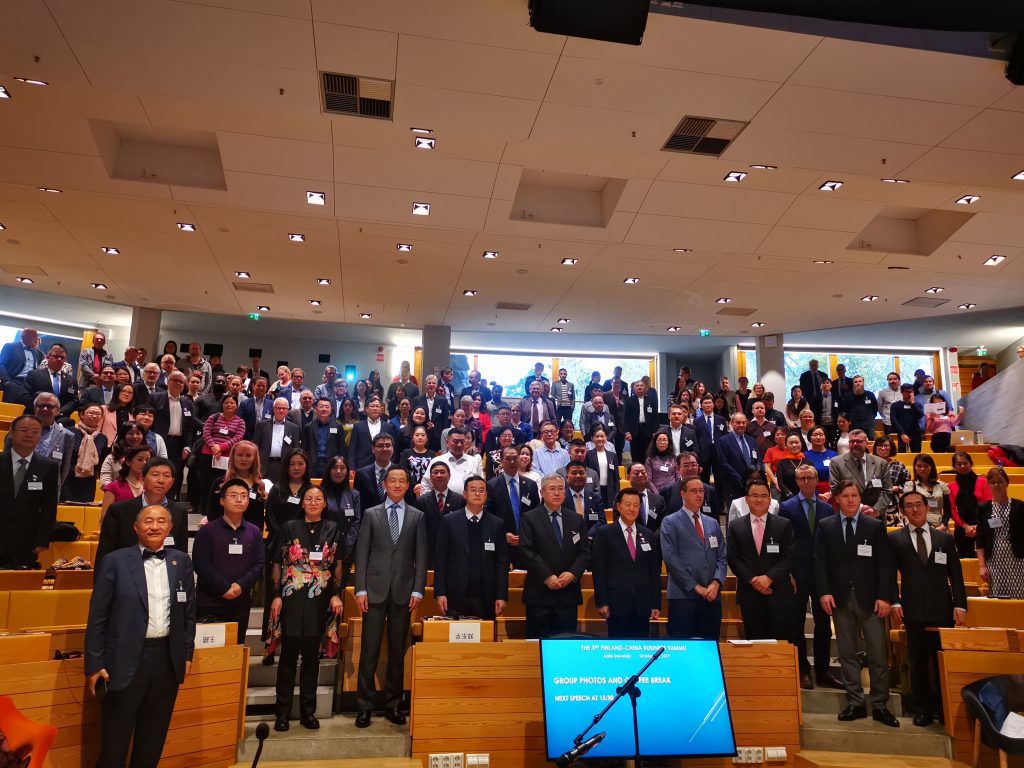 The 3rd Finland-China Business Summit, co-sponsored by the Finnish Chinese Business Council, Aalto University, the China Federation of Overseas Chinese and the Finnish China Development and Exchange Center, and supported by the Parliament of Finland, the Embassy of the People’s Republic of China in Finland, Business Finland, the Finnish National Technical Research Center VTT, the Finnish Enterprise Association, the Helsinki City Council, the University of Helsinki and other companies, was successfully held on October 16th at the famous Aalto University in Finland.

The Finland-China Business Summit coincided with the 70th anniversary of the founding of the People’s Republic of China, and the 69th anniversary of the establishment of diplomatic relations between Finland and China. It is also the year of the “China-Finland Winter Sports Year” and the “Finnish-Chinese New Partnership for the Future”. The close exchange of high-level visits between the heads of state of Finland and China and the traditional friendship between the two countries have laid a solid foundation for the economic, trade and investment cooperation between the governments of Finland and China and companies. In this context, pragmatic cooperation such as strengthening trade and investment between Finland and China has become an inevitable trend. The 3rd Finnish-Chinese Economic and Trade and Investment Summit has established a strong cooperation platform for government agencies, companies and research institutes in Finland and China.

The summit was opened by Zhou Siyang’s with her interpretation of the classical pipa (Chinese instrument) solo “The Ambush from Ten Sides”. The Summit was attended by more than 200 people, comprising of government and business executives from cities such as Helsinki, Espoo, Vantaa and Turku, Salo, Tampere, Lahti, Kemi, Vaasa, Oulu and Lappeenranta,  representatives from the Standing Committee of CPPCC, the All-China Federation of Returned Overseas Chinese, the China Federation of Overseas Chinese Entrepreneurs, China Council for the Promotion of International Trade Shaanxi Sub-council, China Will Peace International Business, China Resource and other guests.

The conference was hosted by Dr. Yang Erlin, Chairman of the Finnish Chinese Business Council and CEO of the Finland-China Development and Exchange Center.

Mr. Tom Packalén, a member of the Parliament of Finland and member of parliament’s Foreign Affairs Committee, attended the summit delivering an opening speech. He congratulated the “3rd Finnish China Economic and Trade and Investment Summit” and stressed that the Parliament of Finland and the Finnish government give great importance to economic and trade development and investment cooperation with China. He highly praised the platform for building cooperation through the summit activities. He himself has visited China on three occasions in recent years and praised specially Nanjing for its innovation and entrepreneurship.

Mr. Sun Liwei, Counselor of the Economic and Commercial Affairs of the Embassy of China in Finland, gave a keynote speech on “Complementing the Advantages of China and Finland and Expanding the Field of Cooperation”. He highly praised the Sino-Finnish relations in recent years from the strategic relationship of state leaders to civil exchanges and cultural exchanges, from economic and trade import and export to tourism and winter sports, etc.  which are constantly deepening and strengthening. He emphasized that China and Finland have huge complementary potentials. For example, there is more room for cooperation between the two countries in the construction of transportation networks. High-tech and innovative cooperation will also become the main pillars of bilateral economic and trade cooperation. Counselor Sun Liwei also wished Finnish enterprises success in the 2nd China International Import Expo and expected more Finnish companies and enterprises to participate in the 3rd China International Import Expo next year, bringing Finnish excellent products to China and passing China To the world.

Mr. Xu Rongmao, member of the Standing Committee of the National Committee of the CPPCC, consultant of the China Federation of Returned Overseas Chinese, Chairman of All-China Federation of Returned Overseas Chinese, President of  CFOCE, Founder and Chairman of Shimao Group, delivered a keynote speech entitled “China’s Business Opportunities under the New International Economic and Trade Structure”. He pointed out that Sino-Finnish friendship has a long history. Under the international economic and trade pattern in which the strategic game of the great powers has intensified and the world’s multi-polar pattern has become increasingly apparent, China still maintains a good economic development trend, the industry is constantly upgrading, and  the economic and trade investment and technological innovation with Finland and other countries continue to strengthen. He emphasized that China and Finland are both participants and beneficiaries of economic globalization. They are the builders of global governance and contributors to world development. China and Finland have strong complementarities and broad prospects in the fields of economic and trade investment and innovation cooperation. Mr. Xu Rongmao said that the China Overseas Chinese Business Association will actively negotiate with Finnish companies through this summit to achieve win-win cooperation.

Ms. Chen Shishu, senior consultant of Business Finland, introduced the Finnish program “Encouraging and attracting Chinese entrepreneurs to invest and start businesses in Finland” in the keynote speech. She introduced to entrepreneurs from China the policies and conditions for the encouragement and help of Chinese companies’ projects in Finland, as well as the soft landings and market research provided by the Finnish National Business Promotion Agency for Chinese companies and start-ups.

Ms. Sanna Öörni, Co-creation manager of Smart Industry and Energy Systems at VTT (Technical Research Center of Finland), gave a keynote speech on “The Ideas and Contributions of Finnish Smart City Development”. She suggested that urbanization may not be the culprit of global climate change but the solution perspective. She believes that the energy issue is at the heart of the smart city concept and introduced the “Smart Otaniemi Region” innovation ecosystem. She pointed out that Finland’s focus is on combining energy and communication research experience with new technologies such as artificial intelligence to inspire more innovative solutions.

Mr. Zheng Dongping, Vice President of Shaanxi Provincial Council for the Promotion of International Trade and Chairman of the International Chamber of Commerce of Shaanxi Province, introduced the economic and trade advantages of Shaanxi Province in a keynote speech entitled “Promoting Finland’s Cooperation with the Midwest of China”. He emphasized that Shanxi Province is located in the geometric center of China’s territory, with convenient transportation and location advantages, and has strong personnel training strength, strong innovation and development capability, and complete industrial system. He pointed out that Shaanxi Province and Finland have complementary advantages in technological innovation, trade, port area and clean energy, and they have enormous potential for cooperation and development. The direct flights from Helsinki to Xi’an  and the opening of the Central European trains have also made Finland an important node for China to Europe.

Mr. Rostislav Baskakov, Director of Technology and Sales at SET CleanTech, gave a keynote speech entitled “Finnish Clean Energy Solutions and More Investment Opportunities”. He highlighted Finland’s advanced waste recycling and application solutions and Finland’s second generation bio-ethanol research and development and new bio-refinery projects. He answered questions from the guests and representatives regarding Finnish rubbish disposal; in the European Union, the landfill ratio is less than 10%, while Finland is as low as 1%.

Professor Carl Fey of the Aalto University Business School made a keynote speech on “Which Management Practices Can Promote China’s Innovation?”, explaining the most effective innovation management model for entrepreneurs. Professor Fey then hosted a panel discussion with corporate guests to explore how to expand business cooperation with China. The guests who participated in the dialogue included Mr. Liu Da, Managing Director of China Resources, Mr. Mika Aarnikka, Regional Manager of Huawei Finland and the Baltic Region, Mr. Jesse Ketonen, Chairman of Nordic Friend, and Mr. Konstantin Tchetchine, General Manager of Business Development of Wärtsilä.

During the summit, a corporate exhibition exchange meeting was held. The delegates made full use of the summit activities to conduct matchmaking and exchange discussions. After the summit, some representatives of the participating enterprises took part in a matchmaking meal in order to further talks.

The summit forum activities received positive response and sponsorship support from the Finnish government and companies, which fully reflected the good momentum of Finnish-Chinese economic and trade cooperation. Everyone hopes that such summit platform activities will continue to be organized in the future.

You can register to the event by clicking the bottom on the right.

NEW REGISTRATION DEADLINE MONDAY 14.10! Without registration the entry fee will be € 50, which will be charged on site at the start of the event.

13:45 Keynote speech /
Mr. Sun Liwei, Counsellor of the Economic and Commercial Office of the Embassy of the People’s Republic of China in Finland
Topic: The complementary advantages of China and Finland and the possibilities for increased co-operation

Sponsors also get their logos on promotional materials and brochures of the event.

Gold sponsors, please provide materials for your presentation at least two weeks beforehand so we can prepare for interpretation.  Time slots will be given out on “first come first served” basis. Note that all presentations must be in English (Chinese translation text added if possible).

There will be an optional match-making networking buffet event between 17:00-19:00. A ticket costs 50€ (includes VAT) if booked in advance, and 90€ at the door. Buffet will be invoiced when we confirm your registration and will be due within 7 days or latest on 8th of October.

Cancellation policy after registration: You will pay a €50 administration fee for not showing up to the event without cancelling latest by 15.10.2019, 12:00 o’clock. This payment will be due 7 days after the event. 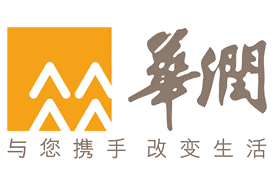